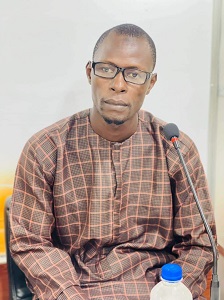 “The tour is a waste of public resources used as a free funding opportunity for the ruling party. The rainy season just ended, and the farmers need support. They went through a lot of challenges. The fertilizer sale was manipulated, and farmers were forced to buy it at a high cost,” he emphasized.

In Hagi’s view, the tour is not worth it as the government will spend millions that should be used to support the farmers.

“If the president is concerned about agriculture, he should use that money to support the farmers. Gambians will not eat mere words. Government must revamp the agricultural sector and the economic capacity of farmers must be supported to deliver quality products and government should empower local businesses,” he said

Mr. Suwaneh further said the country must commit to the Maputo 2002 agreement.

“The country must heavily invest across the chain of agricultural production to improve productivity. The government must commit to the Maputo 2002 agreement by allocating 10% of the annual national budget to agriculture and ensuring access to finance and the market is easier and affordable for farmers,” he said.

He claimed that the president has nothing to show farmers apart from UNDP tractors and the World Bank-donated ambulances. Adding that farmers will not hear anything new but pure politics.

The UDP’s outspoken youth wing’s 2nd vice president said the government must do everything to transform farming into a modern mechanization to improve the plight of farmers.

“Barrow continues to take advantage of their political ignorance to deceive farmers with false promises,” he noted.

Hagi described farming as an important and lucrative business that can change and take the country out of hardship.

“If the government is committed to supporting agriculture, the country will achieve food security and employability,” Hagi said.

He added that “meet the farmer’s tour is just business as usual with empty promises dominating the whole process.”

“I haven’t awaited any possible chance for the president in addressing the plight of farmers.

Looking at the current agricultural budget the sector is marginalized. Less than three hundred million dalasis is budgeted for the agricultural sector compared to other sectors.

I will be a fool to think that the president will not politicize this tour,” he started.

Hagie told TFN that Gambia has fertilized land and if funding agriculture is prioritized the country would no doubt feed itself in the short term and can even export to other markets around the globe but only with “serious leaders.”